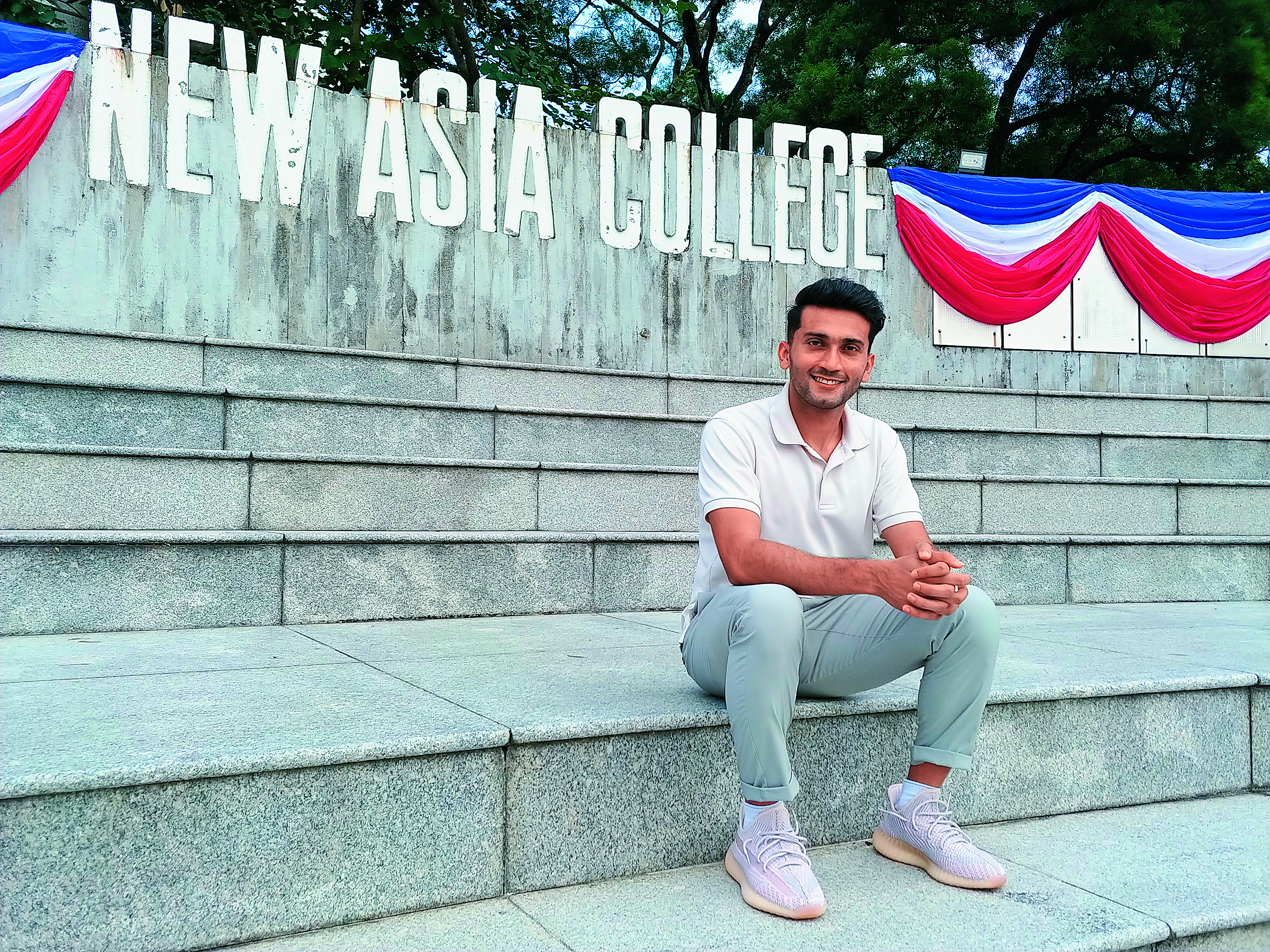 Bilal Afsar came to Hong Kong 12 years ago. He found his life goal because of running.

This is a motivating story. Bilal Afsar (21/New Asia College/Exercise Science and Health Education) is a Hongkonger of Pakistani descent who came to Hong Kong to reunite with his family at the age of 15. Bilal did not speak either Chinese or English, so he immersed himself in dictionaries every night. With a strong passion for endurance running, Bilal had made his way to Hong Kong Inter-School Athletics Competitions. As Bilal concluded his secondary education, several life decisions crossed path – he scored 9 marks in the academically-challenging DSE exam, and his family wanted him to be employed to help with the family's financial burden. Bilal's inner desire? He decided he want to take courses related to sports. With the guidance of Bilal's school principal, he spent three years studying during the day and working as a guard in the night-time. Through this hardship, he was enrolled in CUHK to become the first local ethnic minority student in the Department of Sports Science and Physical Education. Currently, Bilal's goal is to become a PE teacher. This is Bilal's twelfth year in Hong Kong, and he said, if he did not find his passion in running, he would probably not have found his direction in life. He hopes that his journey will inspire ethnic minority students in Hong Kong.

Talented but Not Being Sponsored

In 2010, after Bilal settled in Hong Kong, he was admitted in Delia Memorial School, centred at educating ethnic minority students. Bilal's learning was constantly derailed as he could not understand English or Chinese, “I could not comprehend a word in class, but my classmates would translate for me, a teaching assistant gave me English tutoring sessions after school, and I used to memorise words from dictionaries at night,” said Bilal. “In Secondary 1, I failed all of my classes in the first term; but I passed some of them in the second term. I improved quite a lot.” In Secondary 3, Bilal had a good grasp on English, which released some time to discover his hobbies. Bilal wanted to lose weight, so he participated in school-organised running practices. He ran 3 days a week after school; after a year of practice, his weight decreased from around 90 kilograms to 70. Bilal's coach saw the potential in him and invited him to train for long-distance running as an elite athlete. “I did not have any concept about elite athletes. Since my family was poor, I could not afford running shoes and clothes, so the equipment was a gift from my coach,” he said.

Bilal was awarded a prize in inter-school endurance running competition in Secondary 5, which ignited hope that he could become a full-time professional athlete one day. Dreams faded soon after he applied to enter larger races, “My record for a 10-kilometer race was on Hong Kong's top 20, but I was not admitted into large-scale athletics clubs and I could not join the track-and-field competitions, and hence, could not get sponsorships, rendering my dream financially impossible. Maybe it is because of my ethnicity, as my local runner friend holding similar records as mine was sponsored,” said Bilal. 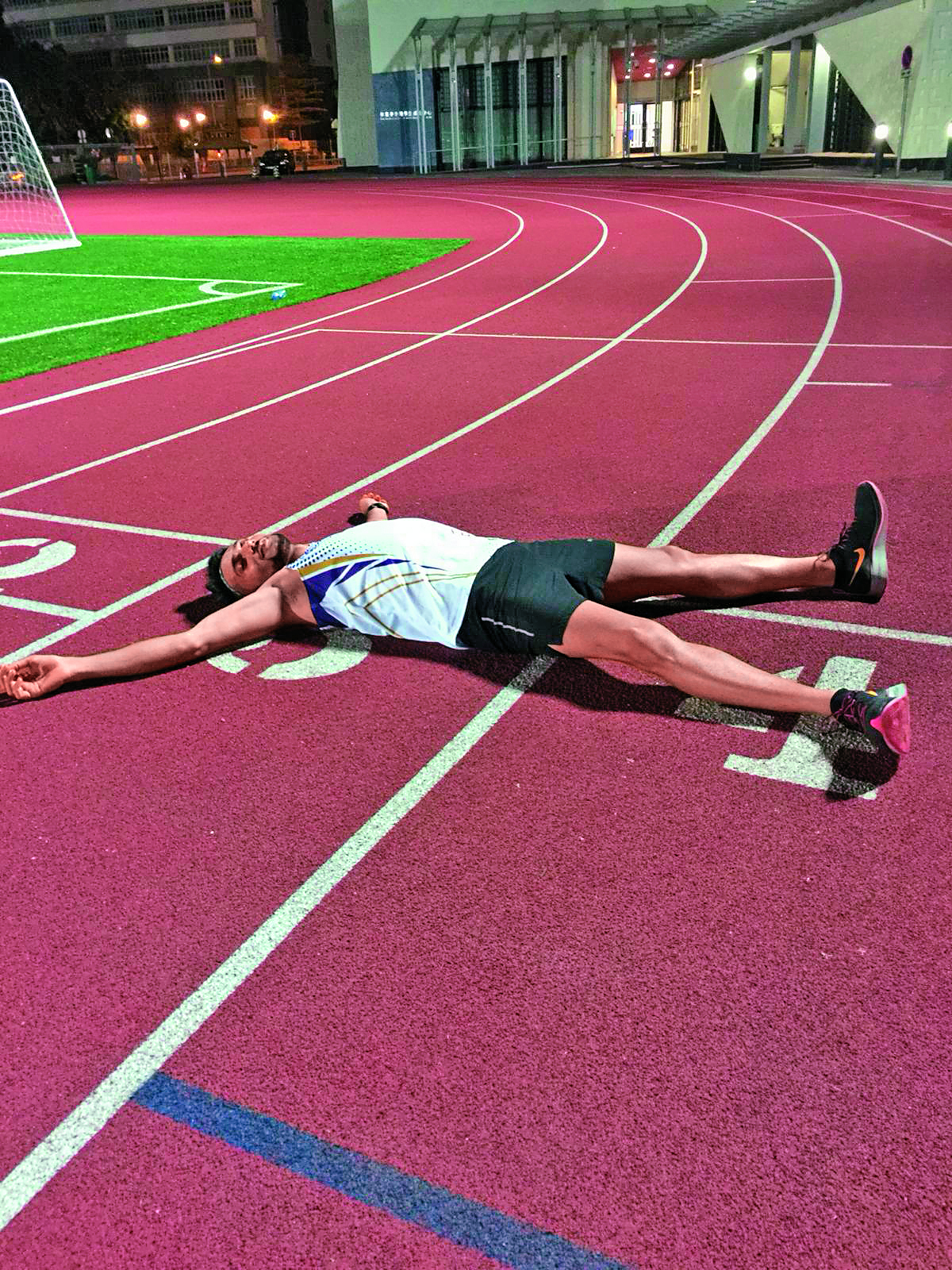 To support his passion for running practices, Bilal worked his way through his 3 years of community college and only had around 4 hours of sleep daily.

Worked His Way Through Community College, Dream Comes True When Admitted into CUHK

Spending more time on tracks usually means less time at school and learning. When Bilal attained 9 marks in Hong Kong's DSE exam, he sought help from his school principal, as he hoped to continue his education in sports: “My principal said, ‘You cannot go back!’ and he wanted to find a pathway to university for me,” said Bilal. His principal suggested that he should enrol in a one-year hotel management-related diploma and a two-year higher diploma in sports coaching afterwards, which would eventually bring him to a bachelor's degree in Exercise Science and Health Education at CUHK. At that time, both of his parents were retired and the only breadwinner was his elder brother working as a construction worker. To alleviate the family's financial burden, Bilal worked his way through the three-year studies as a night-time guard and had received support from scholarships. Despite the long hours during the day and sleeping only 4 hours every night, he persisted in his running practices and achieved excellent academic performance. It was a long, sometimes tiring journey, but certainly a rewarding one when he has admitted to the Department of Sports Science and Physical Education as the first local ethnic minority student in 2019. “During these two years, several professors have asked me about my academic progress and needs; and we have a close and caring cohort of 40 students. Besides, I joined the University's Cross-Country Team and was chosen captain. It was like being in a large family of athletes.” 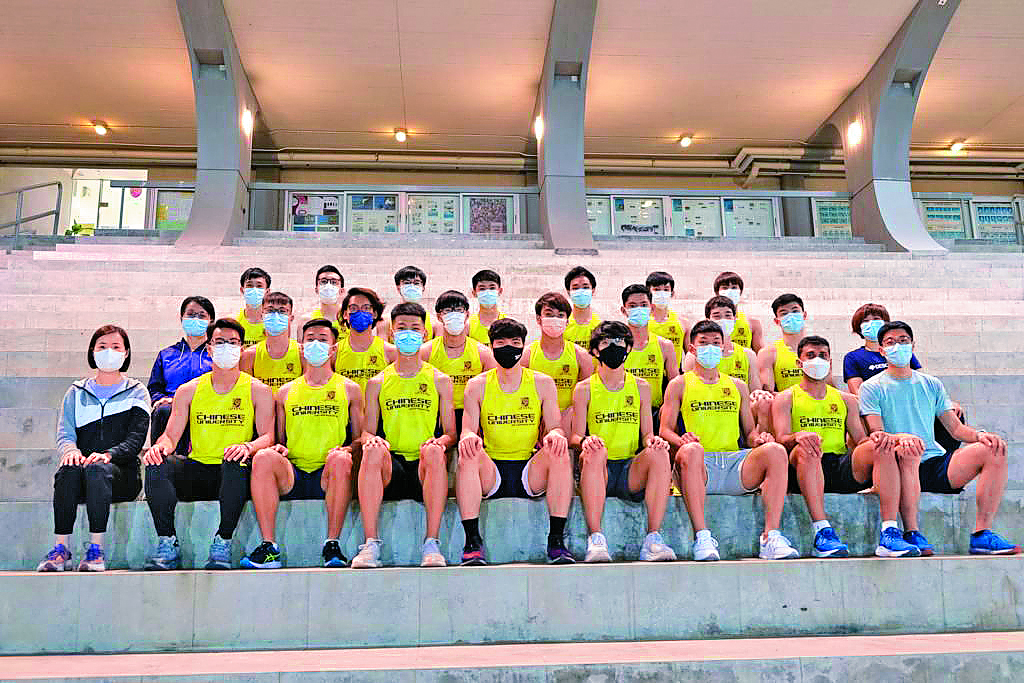 Bilal (second from right, first row) was the captain for the University's Cross-Country Team. Unfortunately, they could rarely participate in competitions due to the COVID-19 pandemic. 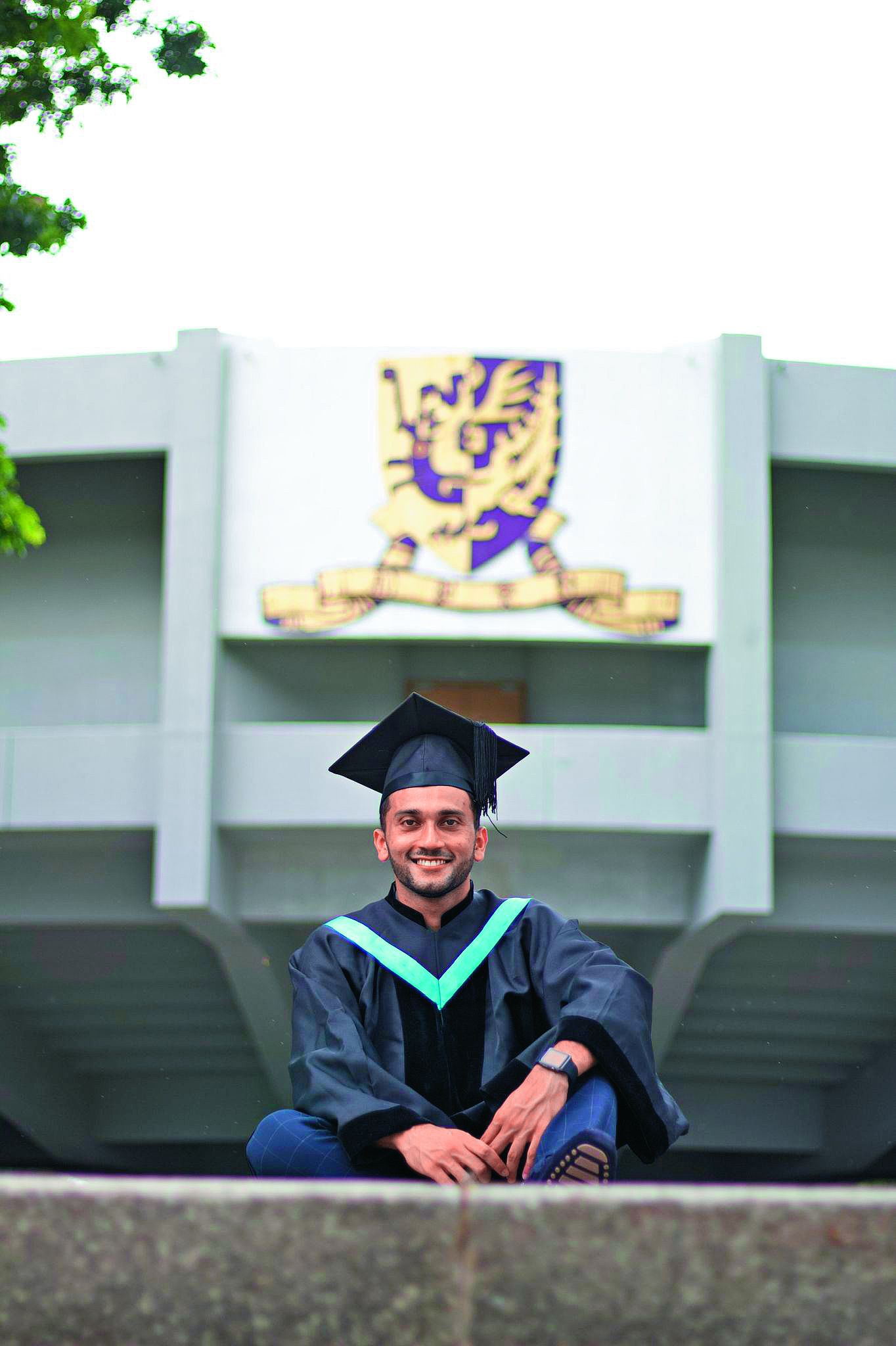 Bilal is the first local ethnic minority student in the Department of Sports Science and Physical Education.

After his bachelor's degree, Bilal is now reading for a Postgraduate Diploma in Education (Primary) and he aims to become PE teacher. Over 200 people applied for a major in Physical Education and the quota is merely 4 seats. “I was admitted and enrolled in that major. It is probably because of my hard work and passion for sports,” said Bilal. He also decided to minor in General Studies to equip himself for his future teaching. Yet, it is near impossible to secure to a teaching post in a Chinese-speaking primary school with his Chinese proficiency of a Primary 2; thus, Bilal can only apply to teach in English-speaking schools. Bilal completed this interview in Cantonese, with only a few English words, but he cannot read and write Chinese. “My Chinese proficiency has limited my career choice, such as applying for a position in the government. I want to learn Chinese again, but courses outside of formal education mainly focus on conversations, which are not suitable for me. Also, I want to study physiotherapy in the future.” Bilal would laugh it off when he was asked about his family's view on his academic path. Bilal said his family cannot quite understand his aspirations and is only concerned about his graduation. He would explain repeatedly, but fortunately for now, he is working as a part-time research assistant to help with the family's expenses. 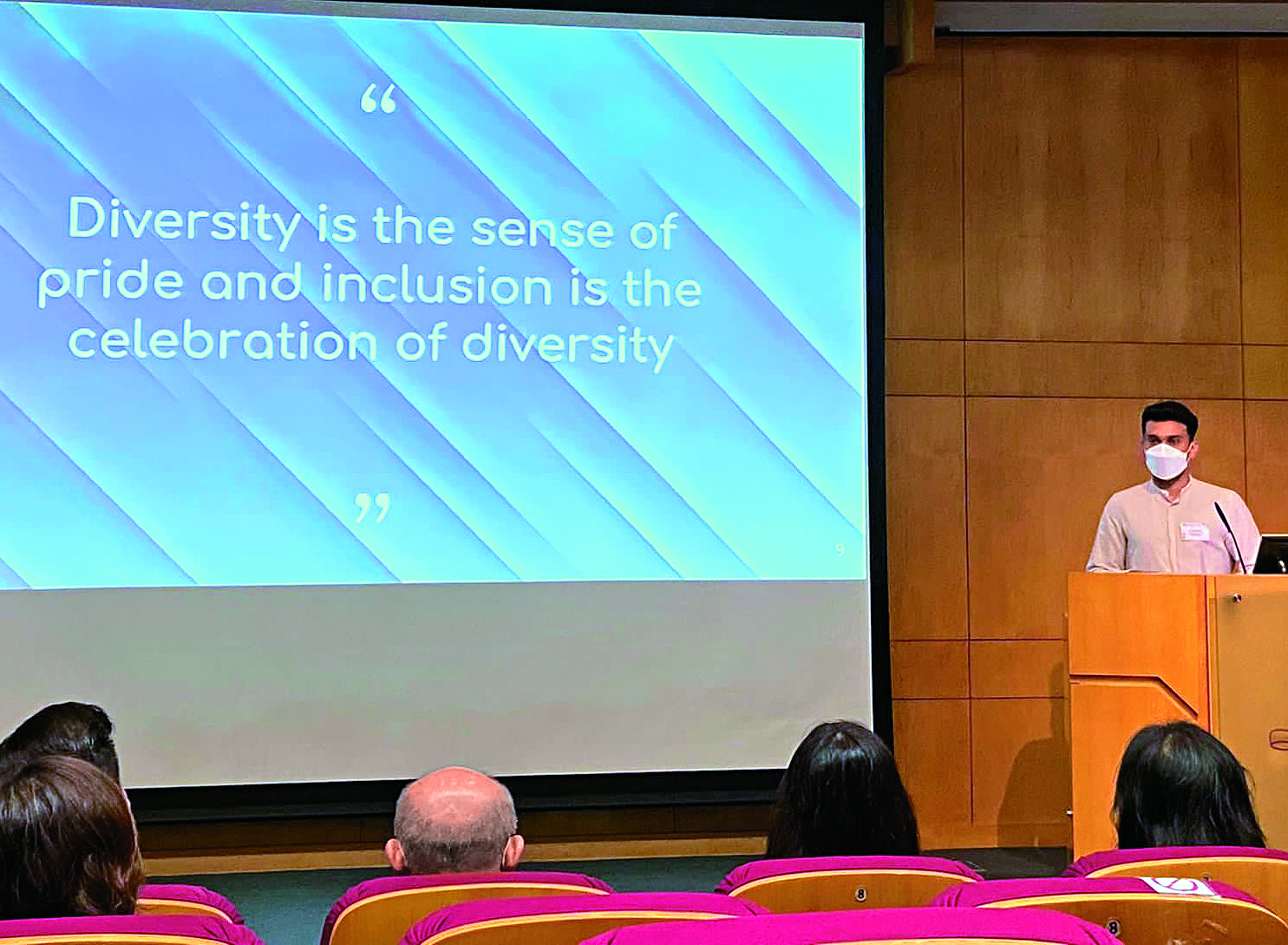 Previously, Bilal shared his personal experiences on campus to illustrate the importance of diversity and inclusion.