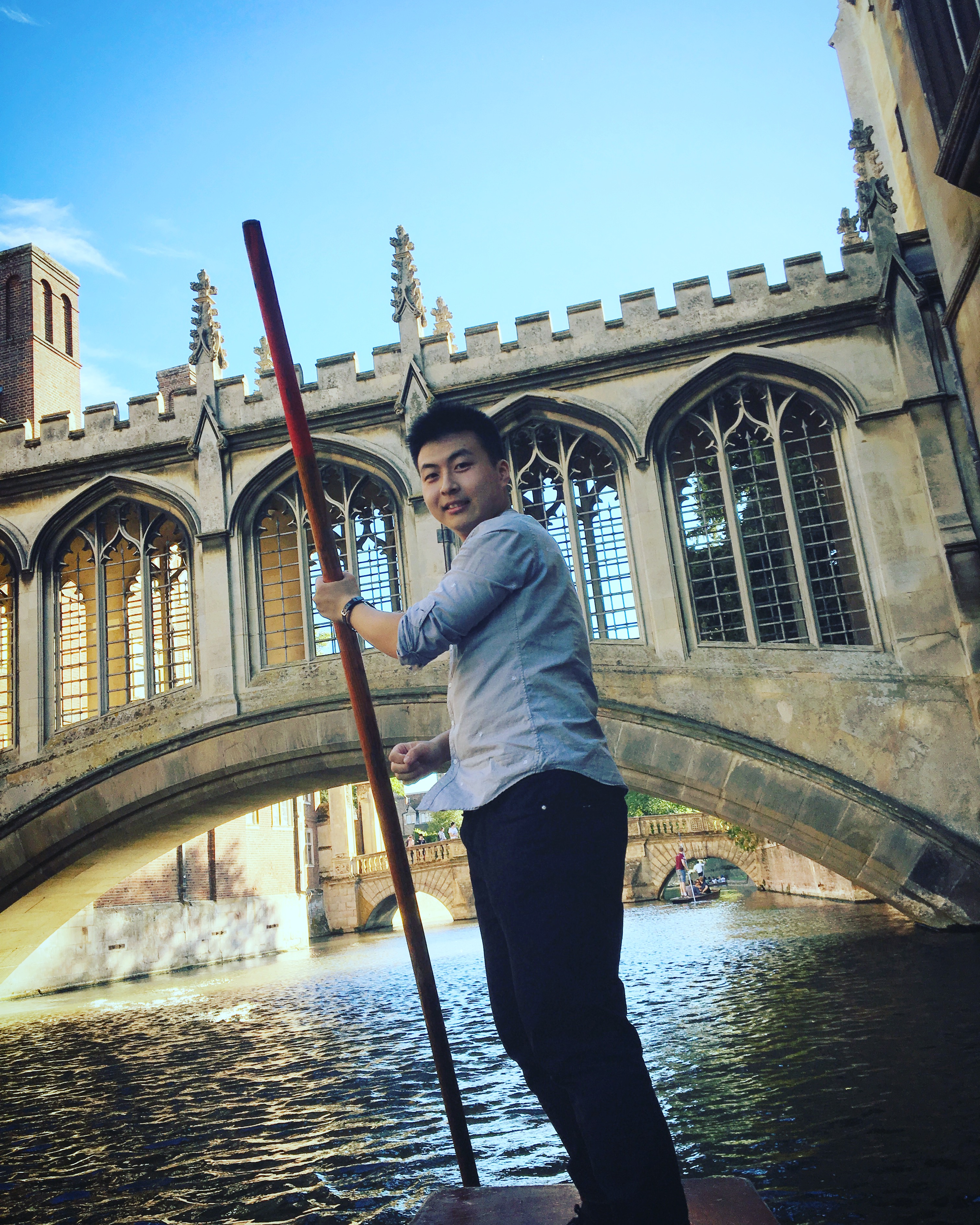 Upon completing the undergraduate degree in Urban Studies at CUHK, Joseph received a scholarship to pursue his studies at the University of Cambridge.

Joseph Hongsheng Zhao (18/Morningside/Urban Studies) from Qingdao scored the highest on the Gaokao and was admitted to CUHK. While enrolling in a social science program, he was immediately intrigued by urban studies, which enhanced his analytical, critical thinking , and active learning skills. As encouraged by his CUHK professors, he carried on his studies at the University of Cambridge, planning to pursue a career in the education or research field after graduating this year. Looking back on his journey, Joseph says that the whole-person education and care he received from the professors at CUHK have greatly influenced his personal growth and development. He gained insight into his potential and was equipped to explore the world with courage.

Before studying in Hong Kong, Joseph was brought up in Qingdao. He mentioned that northern China had a craze for studying in Hong Kong. "Several secondary school seniors returned to school to share their experiences of studying in Hong Kong. One of them was a CUHK law student, which made me long for academic freedom, internationalization, and College culture at CUHK." Eventually, he became the top-scoring liberal arts student at the Qingdao Gaokao and was awarded a full scholarship to study at CUHK. 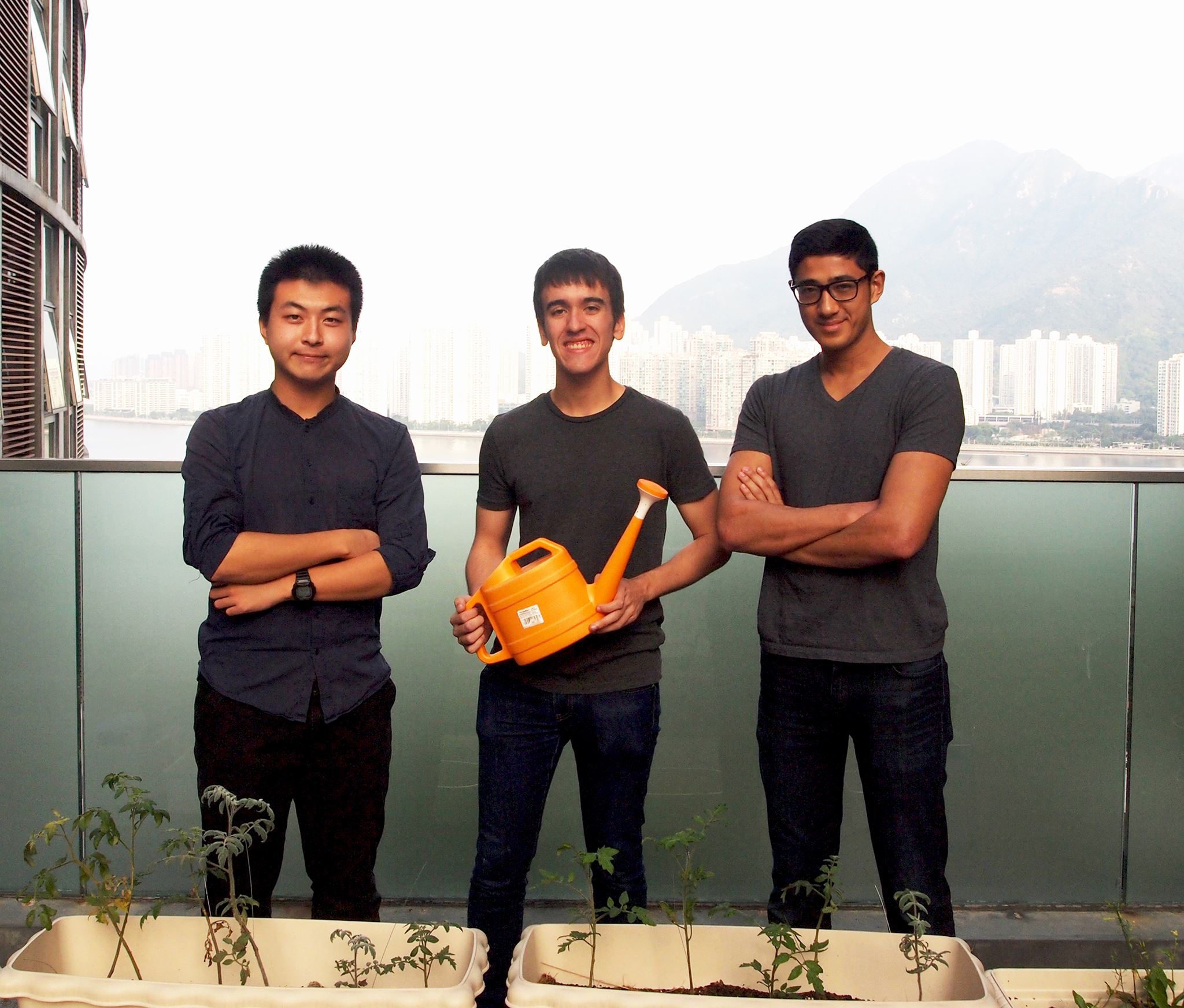 In order to implement the idea of sustainable development in urban studies, Joseph (left) and his classmates built 'Green Roofs' at Morningside College.

Over HKD$1.2 million was granted in the spirit of indomitability
Joseph began his first year at CUHK by exploring various social science courses before deciding to major in urban studies, a relatively uncommon discipline. "It is an interdisciplinary subject. I examined urban street sleepers in my thesis, which is not only a matter of economics but also sociology, anthropology, etc. It also has a lot to do with urban planning and design. Then, I worked as an Undergraduate Research Assistant at the Department of Architecture, College of Design and Environment of National University of Singapore. This deepened my interest in urban development through my involvement in building services, surveying, etc.".

After graduating from CUHK, Joseph earned a scholarship to study at the University of Cambridge, where he studied Master of Philosophy in Planning, Growth, and Regeneration. He is currently a doctoral candidate at the Center of Development Studies and the Department of Land Economy with research interests in urban planning and design and also urban-rural flows. Additionally, he founded the Cambridge Chinese Migration Studies Group in 2019, promoting international academic exchange and cooperation.

Joseph has received more than HK$ 1.2 million in research grants and subsidies since joining the University. Besides his excellent academic results, he has also learned valuable lessons from countless failures. "About one out of ten applications is successful. In order to apply for grants sustainably, one must have an indomitable attitude and be strategic. CUHK has an abundance of learning resources. Since the beginning of my studies, I have identified academic research as my career path. As a means of strengthening my skills in this area, I actively applied for scholarships and research grants."

Sir James Mirrlees's encouragement lingering in mind: a pity we can't meet again at Cambridge
Upon being asked about a person that most sticks out to him from his time at CUHK, Joseph initially mentioned Sir James Mirrlees, the former College Master of Morningside College. "He was an alumnus of the University of Cambridge and a Nobel Prize winner in Economics. He is friendly and easy-going with students. I was apprehensive about applying to Cambridge at first, but he shared his valuable advice and encouraged me by saying, "Joseph, see you at Cambridge!" Unfortunately, this did not come true. He passed away in mid-2018." 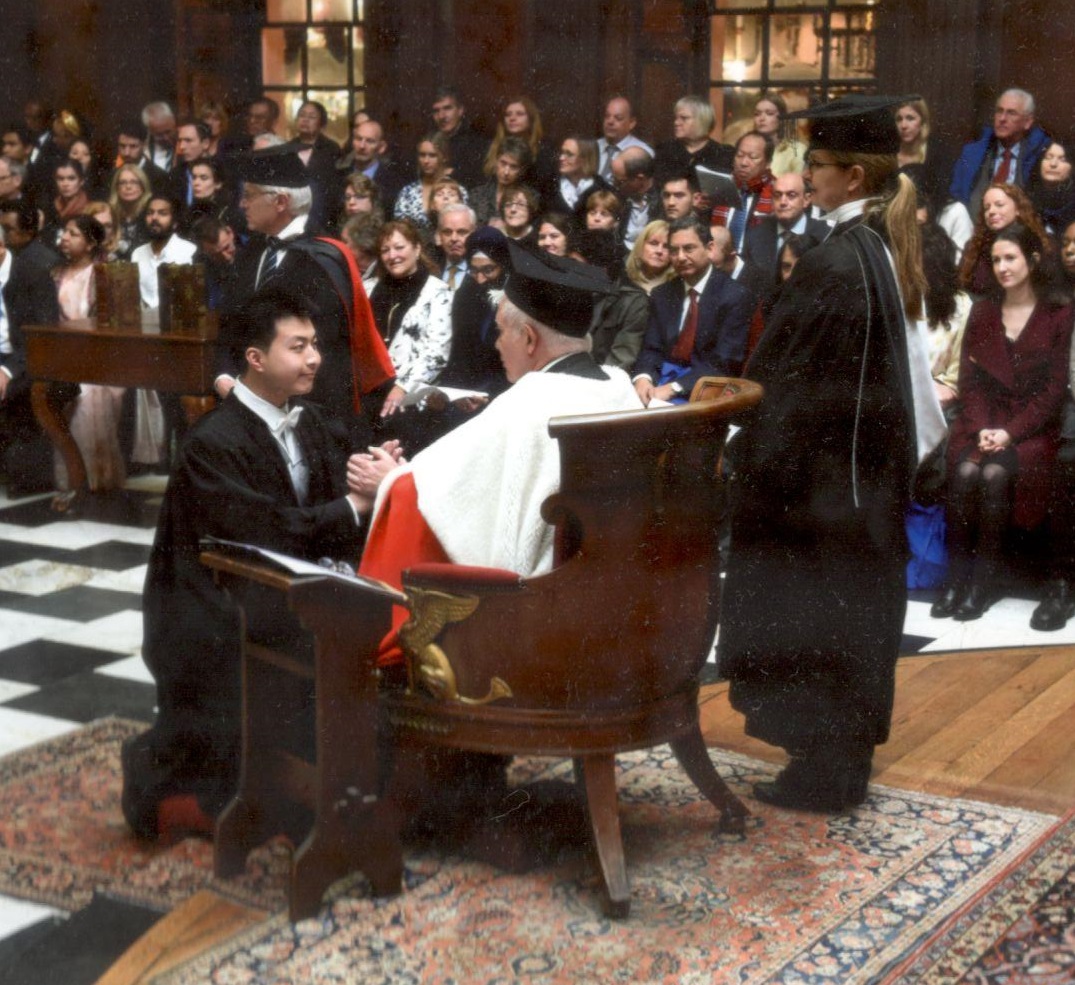 Joseph graduated from the University of Cambridge with a Master's degree.

Furthermore, Joseph still keeps in touch with several professors at CUHK, including Professor NG Mee Kam, the Programme Director of Urban Studies, and Professor Hendrik TIEBEN, the then Associate Program Director. He praised their kindness in always giving academic or life advice. 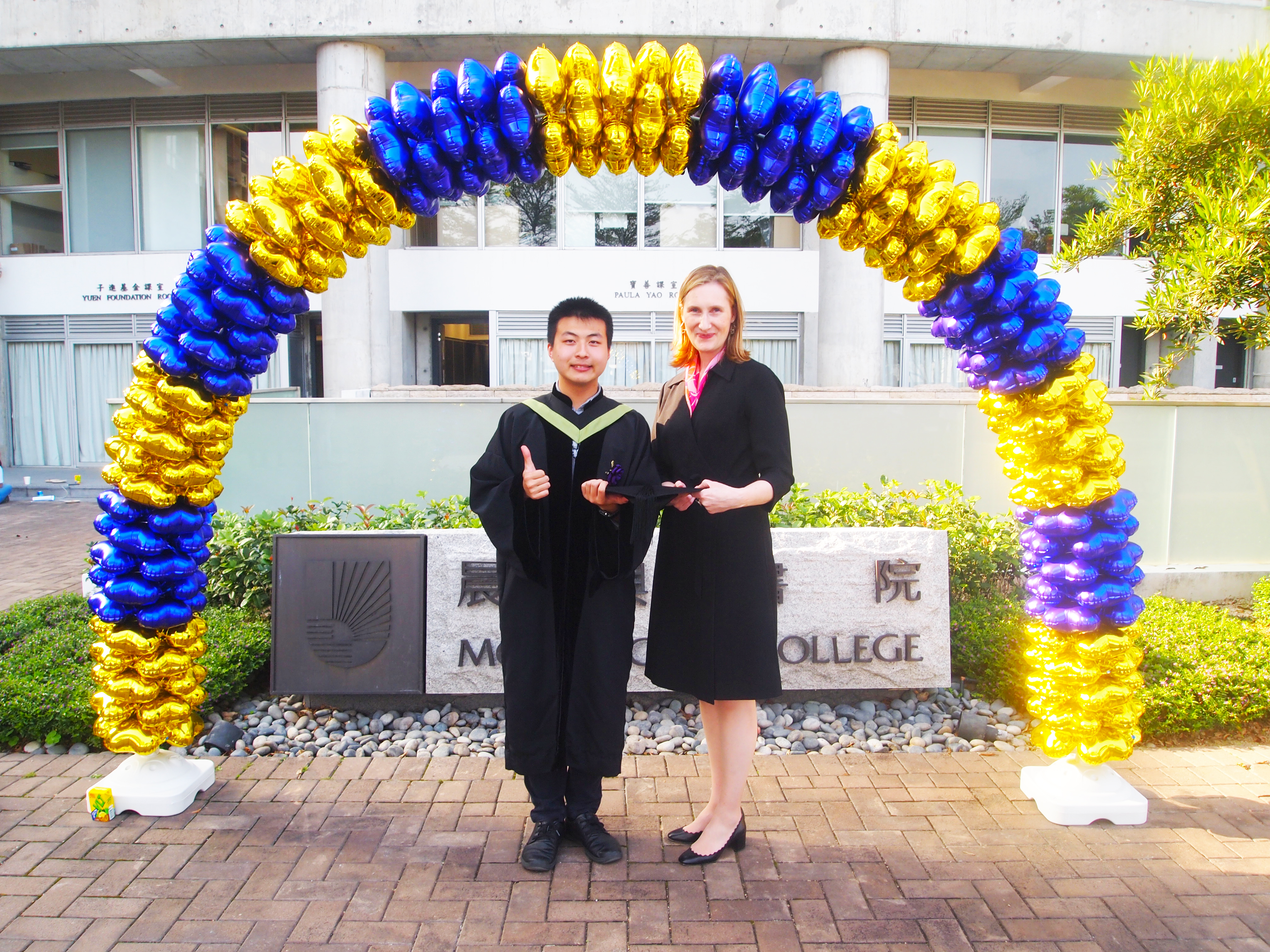 There are a number of professors at Morningside College that Joseph found unforgettable, including the current warden, Professor Ann HUSS (right).

College systems differ greatly: equal resources and flexibility in CUHK
While the University of Cambridge has 31 colleges, CUHK is the only university in Hong Kong that adopts the College system. Joseph analyses the differences between the two. "Each of the nine Colleges in CUHK has its own culture and colour. However, students are allowed to participate in activities across Colleges, the allocation of resources between Colleges is evenly distributed and coordination between Colleges is highly flexible. However, Cambridge's Colleges are highly autonomous, their resources vary greatly, and coordination among Colleges is poor. Libraries at different Colleges, for example, are not interconnected."

Joseph's choice of Morningside College was because of the College general studies course: Current Dilemmas and Their Historical Context, which interested him. Discussions in class strengthened his analytical skill, logical thinking, and critical thinking. As a University Morning Running Club member, he served as its president in his third year. Running in the morning was his routine for four years at CUHK. He was left with an unforgettable memory of his enthusiasm for training with his classmates. Moreover, he also loves to participate in cultural exchange and experience activities at i-LOUNGE, where he gets to interact with people from different cultures and broadens his horizons by meeting like-minded people. 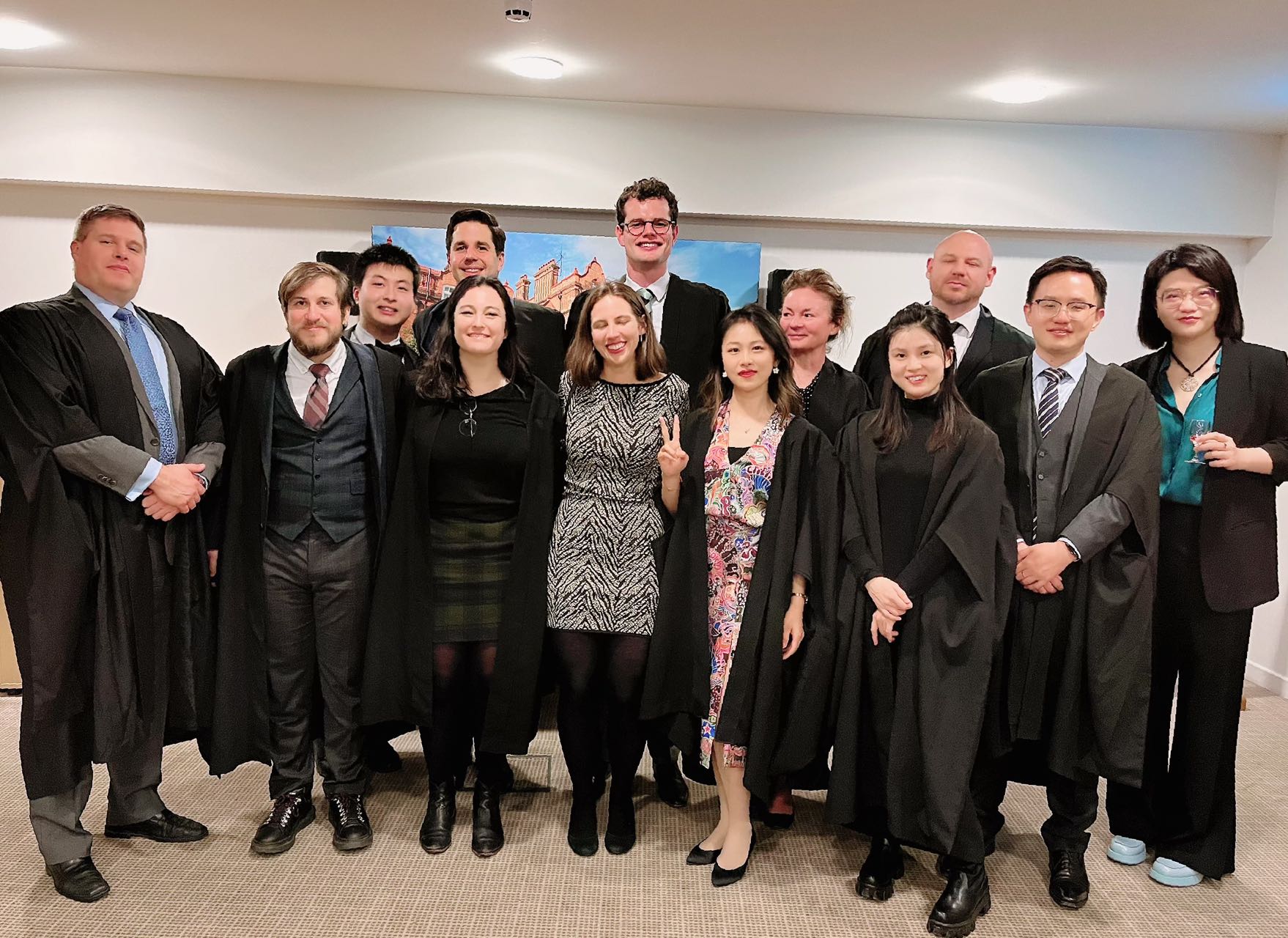 Joseph (Third from left) and his doctoral degree classmates attended the high-table dinner.